Feel like you need detailed guidance for further study options?

Enthusiasm is observed in Indian students when it comes to studying abroad. They are unhesitant to meet new people, explore different locations, and adapt to the new environment. There are various credible grounds which justify studying abroad. In the last two decades, academic excellence, practical knowledge, and many more attributes are the key search words for students who seek admission in higher institutes. We all want a world-class experience, and for that, we have to come out of our comfort zones and do something incredible. Foreign countries provide phenomenal benefits to overseas students.

The statistics of opting for different countries instead of your home country for foreign studies has witnessed dynamic changes in India.

It has been estimated that over 5 million students are studying in a country other than their home country in the world. India is the second-largest supplier of international students after China. In 2019, around 7,53,000 students were studying in various nations, according to a report by the Ministry of External Affairs. These figures were 66,713 in the year 2000 which rose to 3,01,406 overseas students in the year 2016.

A report was released by the Reserve Bank of India that affirmed that India witnessed a splurge in spending on tutoring and lodging fees by Indians studying overseas by 44% from $1.9 billion in 2013-14 to $2.8 billion in 2017-18. 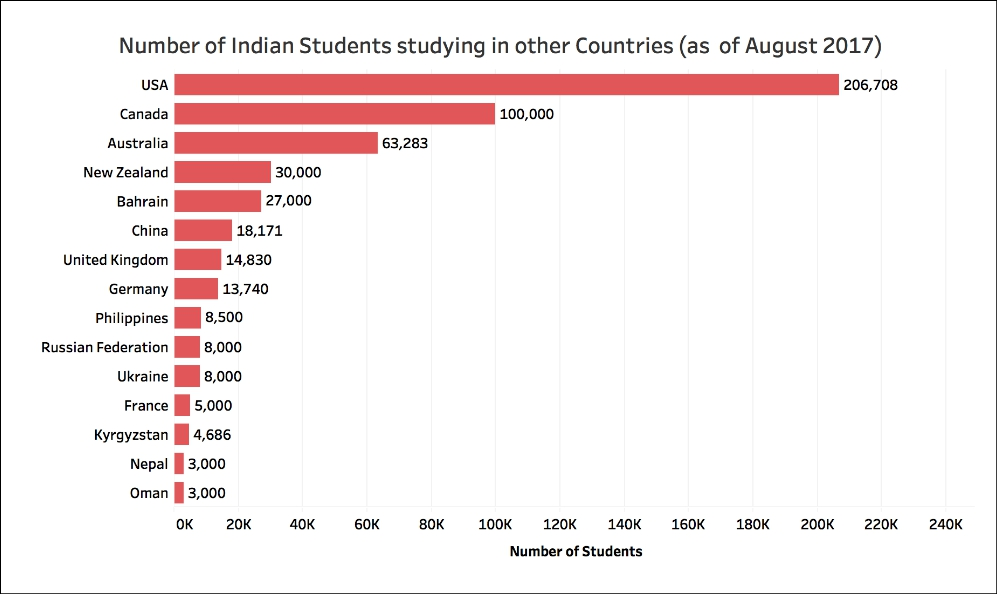 The USA continues to be the leading country in dragging students from all over the world, especially from India. Only three countries - the USA, Canada, and Australia account for 55% of Indian students at the end of the year 2017. The trends in the current year are also the same, now students are attracted to some infrequent parts of the world like Eastern Europe, Asia, etc.

In 2019, 2,02,014 students got admission to the USA, which shows a growth of 2.9% from last year's data. Indian students are fascinated by studying in the eminent schools of the USA to pursue STEM fields. Another reason is the policy changes in the USA that allow STEM students to stay in the USA for Optical Practical Training opportunities for three years after completion of their studies. This policy allures most of the Indian scholars to take their careers in prosperous pathways.

Other popular destinations among the Indian scholars are Australia, Canada, New Zealand, Germany, Ukraine, Russia, and Georgia. Ukraine and Russia have emerged as popular study locations in medical fields.

Why Choose Dubai As Your Study Abroad Destination

Top Courses To Pursue In The UK After The 12th Commerce

Subscribe to receive updates on branding, marketing and how to build your business.

Please fill out your information

Sign in to avail exciting Education to your fingertips!

Enter your email address below and we’ll send you password reset instructions.

Assess your profile with Edumpus!

Sign Up to avail exciting Education to your fingertips!

We guide you through the extensive admissions process laid down by different institutions from across the globe. Our Services Include:

We cut down on the information overload and bring all the important services under one umbrella to empower you in making well informed to help you grow academically.

Choose from any of the following products to grow at the desired pace:

Triadge is a set of services offered under three major verticals by Edumpus to Educational Institutions looking forward to expanding their international student recruitment without necessarily having to set up a regional enrollment/admissions/marketing office. The three major verticals are the Global Catalyst Program, Value Chain Proposition & Campus Ambassador Program. All of these verticals are targeted towards bringing about a quantitative and qualitative growth in the international student recruitment activities of Institutions of global repute by facilitating an enhanced engagement with the prospective students.